A retrospective blog written about Serenity in Leadership's interview with Lex Showunmi, founder of 3S Partnerships. 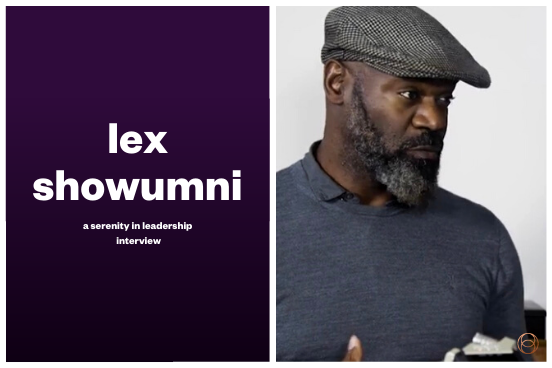 This is 3S Partnerships, an organisation founded by a shining light in the security business, Lex Showunmi. The company is a product of the challenging experiences Lex has overcome – both as a child growing up in a difficult household to his later years as a security guard in a gruelling industry.

The first thing you notice when you meet Lex is his impressive 6 ft 7 stance. The very next thing you notice is his gentle and calming presence.This combination of strength and serenity has been a recurring theme throughout his life. When we sat down to talk with Lex about his views on leadership, one thing was apparent: Lex is succeeding in transforming the ways typically ‘masculine’ organisations lead. We’ve extracted some of the perspectives and tools that Lex has used to build his own highly successful - and empathetic - organisation, so that you can, too.

The benefits of balance

“We talk a lot about women in the workplace having to lead with their masculine energy just to fit in” - Jessica Ball. ‍

One of the most remarkable things about Lex is his willingness to engage in difficult conversations when it comes to gendered traits in the workplace. His fascination with our feminine qualities comes from his work in conflict management and this has proven to be one of the sharpest tools in his kit.

Lex’s openness to talk about the feminine and masculine qualities that each of us possess is compelling. He is a firm believer that creating a healthy balance between the two is essential for optimal leadership and personal growth. According to Lex, embracing the softer aspects (feminine qualities) of what people believe power is, is a true superpower. While he has come across men who are quicker to use their assertive, stronger traits in the workforce (masculine traits), he has seen how embracing the feminine strengths of slowing down and listening first, leads to remarkable results. Like Serenity in Leadership, Lex believes that women cannot fully embrace their feminine traits, for instance intuition, empathy, and collaboration, without understanding their masculine too - like assertiveness, strength, independence.The same can be said for men when it comes to fully understanding their feminine qualities in order to fully embrace their masculine.

Find ways to incorporate feminine qualities into your leadership for a healthier expression of power. Examples include; promoting collaboration, actively listening, practising empathy/ greater understanding of the other.

Communication is all about framing

“Love is cheesy, but it doesn't mean it’s not important”.

Our experiences shape our view of the world and the language we use to describe and connect to it. As a result, language plays a crucial role in human development and organisational culture. Although not typically associated with the security industry, Lex believes that the values of patience and love are crucial for collective power, individual growth and company-wide success; however, these qualities must be framed in such a way as to make them digestible for men, women, people from different contexts, countries and gender identities.

Lex uses a great example to demonstrate this. He explains that his security guards who identify themselves as a ‘security person’ will likely demonstrate the stereotypical behaviours that go with this profession (namely strength, assertiveness and independence). This framing differs to those of his staff who recognise that they are human beings first, delivering a service and using these qualities to generate a specific result. Lex believes that the way we frame our roles at work largely determines the behaviours we then choose to achieve that job.

Bring out the soft sides of people through mindful framing of language, in order to tap into more human traits.

Culture is a symbiotic relationship

“Your culture is what your people are saying it is, not what you as a manager or boss say it is”

Lex has been successful in ensuring 3S Partnerships upholds a culture that simultaneously empowers employees to self-direct and support each other.

While he wants his employees to speak highly of his company, he himself has done the work to better understand what he needs to do to embed this behaviour. Lex is living proof that leadership is a top-down responsibility. He achieves this by sharing his personal journey with each of his new employees, further embedding the type of actions he wants to see and the type of language he wants to hear. It is evident that Lex understands that culture is a way of describing a symbiotic relationship.

The above is clearly working. In our interview with Lex, he shares a touching account of a staff member who despite moving far away from work, chose to sit through the long commute over a new job because of the culture Lex had created. Now that’s commitment.

If you are unsure what your organisational culture says about you, look to your employees’ behaviour for the answers.

The above is a just a taste of the lessons we have learnt from Lex. For the full interview, which is packed with plenty of wisdom and practical advice on bettering your leadership, subscribe to any of our channels below. Don’t forget to share with your community!

download report summary (PDF)
Thank you! Your submission has been received!
Oops! Something went wrong while submitting the form.
Friday, October 4, 2019
Contributed by:
by Serenity in Leadership
< Return to all categories

Design for Inclusion: Demystifying the Building Blocks of an Inclusive Workplace

Letter from the CEO: The Roots of Misogyny

Disability Inclusion: Addressing the elephant in the room