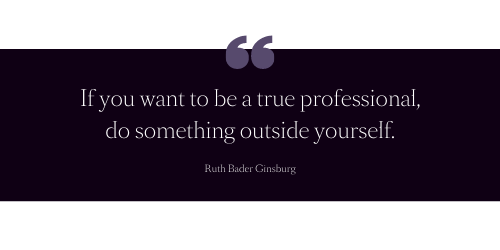 A look back at - Who was Justice Ruth Bader Ginsburg?

In the eyes of many, Justice Ruth Bader Ginsburg (1933-2020) was a true visionary, heroine and trailblazer. The late civil rights spearhead was a champion of race and gender equality, as well as a pioneering lawyer .

Ginsburg, or RBG as she was latterly nicknamed, became only the second female justice of the Supreme Court, as well as the first Jewish female justice. The road leading to this historic appointment was one filled with barriers. Throughout her career she faced discrimination on three fronts: as a Jewish person, as a woman, and as she noted most significantly, “as a mother”.

Ginsberg stated that she was alert to discrimination from a young age. Growing up during World War II in a Jewish family she quickly became sensitive to unjust treatment and developed a sense of care for others. She went on to study law at the University of Columbia where she learnt to balance life as a mother and her new role as a law student. She overcame obstacles in her personal life and achieved great academic success. Despite this she continued to encounter gender discrimination whilst seeking employment – after being recommended for a Supreme Court Clerkship, male judges were concerned she would be diverted by “familial obligations”.

Ginsberg’s struggles neither decreased in intensity nor deterred her from reaching her goals while defying expectations. In 1963 she taught at Rutgers University Law School and then at Columbia University, where she became its first female tenured professor. Her journey into American politics began in the 1970s where she served as director of the Women’s Rights Project of the American Civil Liberties Union (ACLU). She was appointed to the U.S. Court of Appeals for the District of Columbia in 1980 and named to the US Supreme Court in 1993 by President Bill Clinton. She began her career as a Justice continuing to do what she had always done, fight for gender equality whilst now unifying the liberal block of the court.

She is not just a hero to women and girls or a role model for their daughters; she also inspired generations of men and boys and fought to make their lives better.

Thom Dennis, CEO of Serenity in Leadership, shares his thoughts on Ruth’s legacy, her work in diversity and the leadership notes everyone should be taking as a result of her incredible work.

What did you admire most about Ruth Bader Ginsburg?

She was a tzadik*, a righteous woman, exemplified by her pragmatism and her humanity.

She had an uncanny ability to engage with people with opposing views without threatening them and still achieving her aim. When it came to issues surrounding gender time after time she would illustrate how discrimination against women can harm men.  There are various other examples of her successfully arguing against the Supreme Court, before becoming a Supreme Court Justice herself. Her ability to convey well-reasoned and argued presentations enabled her to educate her peers in subject areas which they felt were their areas of expertise, but where ultimately they lacked understanding. That she was able to display such diplomacy, tact, cultural and educational understanding in such a male dominated environment was nothing short of remarkable.

One of my favourite examples of RBG’s demonstration of humanity is actually her friendship with Justice Antonin Scalia, one of the court’s most conservative voices. Not only did they grow up as outsiders, but they also sat on opposing benches in the Supreme Court yet she enjoyed being friends with someone with diametrically opposed views to herself. Often they would even help strengthen each other’s arguments before court. She didn't agree with many of his ideas but had the rare capacity to see beyond Scalia’s political convictions and find the real human being inside.

She was a hero to women and indeed men, having represented in numerous legal cases that had sex discrimination as their central theme, irrelevant of the fact whether the discrimination involved women or men. I could list many examples of times where she displayed her strong interpersonal skills but her relationship with Antonin Scalia stands out because of her open-mindedness and willingness to hear others is so rare.

RBG’s approach to success and fight for justice was also rare. What leadership qualities did she emulate that you believe are critical for organisations today?

RBG’s affiliation for justice came largely from her Jewish heritage – she believed demand for justice, peace, and enlightenment runs through Jewish history and tradition.  “Justice, justice thou shalt pursue”, a biblical verse that Ginsburg lived by and one with which I also resonate.  Whilst maintaining integrity she demonstrated true professionalism. I come from a military background and so to me, a key element of professionalism is being well prepared. Ruth never took anything for granted and this was demonstrated by her critical thinking and essentially, arguments that you couldn't really argue against. She worked incredibly hard throughout her life despite so many obstacles, both personal and professional. She was dedicated to her cause, and she maintained her humanity from beginning to end. She wasn't driven by her ego but instead, a sense of what was right. I believe that her egoless leadership is truly what set her apart from the rest of us, and what leaders of the future really need to emulate.

“My most fervent wish is that I will not be replaced until a new president is installed.” What does this mean to you in the context of leadership?

We must have a balance of influence in positions of power. All over the world we are seeing examples of power being collected in very small pockets and as a result, that power is being wielded in destructive ways. When you have very little diversity in leadership, the result is almost inevitably an abuse of power and the onset of dysfunctionality. To me, RBG’s final wish was a plea to continue her work until we were in a safer pair of hands than that of President Donald Trump. What could be more noble than representing diversity, carving out space for all voices to be heard, and working for greater representation in government, in organisations and in society as a whole?

May you rest in peace, Justice Ruth Bader Ginsburg. It is for us to continue your legacy, strive for justice and fairness, and promote inclusion and humility in leadership wherever we can.

* The word Tzadik is a Hebrew term related to the word Tzedek. In Hebrew Tzedek is not only the word for justice but also righteousness and for helping those less fortunate. One who graces us with such extraordinary deeds or teachings is known as a Tzadik.

No items found.
Contributed by:
Thom Dennis
< Return to all categories